EOY has just passed like two days ago.
Man, I miss that day. T_T;;

On that day...
7 AM, reached Yuki's house.
Slacked about an hour before putting on the costume.
After that, flew to Tampines Mall and met Phelios.
Then flew to Expo.

After reaching, went to the toilet to put make-up~
and lost my contact lens.
One side only. T_T;;
So I became the one eye green-hair monster freak. ;A;
But cover one eye lar. =w=

Met a WHOLE lot of people~
and many many many Kaitos.
I am SO original, the only green long-sleeved Kaito there. 8D
Followed Yuki and she followed me~

Around 4 to 5 PM, have mini-photoshoot~
I was un-prepared to do a yaoi shoot, dammit.
-headdesk-

Then go out with Izumi~
Flew to Tampines Mall and eat dinner~
Then went back home~ xDD
and died. Joking. 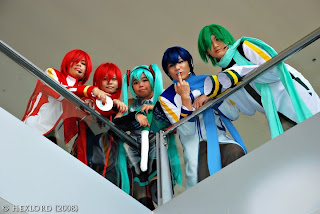 Smexish shoot of myself. LOL. 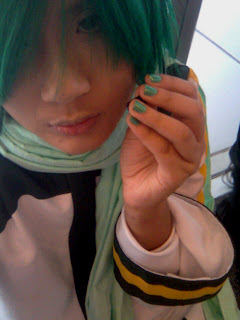